Myself and others would argue that baseball is the most difficult sport ever known to man. Hitting a round baseball traveling 90+ MPH with a round bat isn’t something that you can do without dedicated practice. The other aspects of the game such as defense and baserunning require tedious training as well. Baseball is the only sport where the human being scores without the ball. The individual is celebrated without trying to draw attention to himself.

I chose baseball at the age of 8 years old as my favorite sport because I felt that it would best prepare me for life. In life, we are guaranteed to face adversity. Baseball is the only sport that considers you a success based on how many times that you FAIL. It forces you to learn from your mistakes and make the adjustments in an effort to succeed. Alex Rodriguez is one of the games best players and one of the wealthiest sports figures. He recently signed a contract earning him over $260 million guaranteed dollars through the life of the contract. The funny part is that he only gets a hit 30% of the time. In the world of football, Alex would be considered a failure and unemployed. Try making a NBA team as a 30% shooter.  Good luck!

At the age of 8, I dreamed of being successful as a man of God, husband, father, entrepreneur, community leader and a trusted friend. I can proudly say that my dream is now a reality thanks to America’s favorite game, BASEBALL! 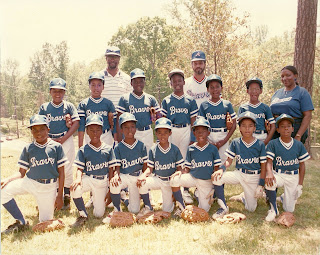