Older
Newer
The day began with check in at 9AM and it is now 11PM and we just got back to the hotel.  Mendez is still amped up from a great day.
He threw 92 MPH from the outfield in the showcase format.  His pop time was 1.8 from the catching position which is a solid major league average grade.  He was a little tight in the beginning of batting practice but quickly settled in and began to hit line drives.
When the lights came on, Mendez stepped in the box against an easy throwing right hander that topped out with a 93 MPH fastball.  The first pitch that Mendez saw was a 92 MPH fastball on the outside corner that he drove up the middle for a base hit single.  The ball was hit so hard that the middle infielders didn’t even attempt to field it.  Getting the single wasn’t enough so he immediately stole second base.  Three pitches later, he stole 3rd base.
All and all, it was a great day to perform in front of hundreds of college and MLB scouts.  I am glad to be on the ride. 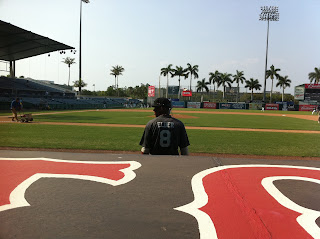