The annual College Baseball World Series has a new corporate home.  AmeriTrade Park in Omaha, Nebraska now seats more people than it’s former CWS home Rosenblatt Stadium and provides an even better fan experience for the thousands of fans that travel from coast to coast to witness the best teams in college baseball compete.

NCAA college baseball doesn’t make nearly as much money as college football but you don’t build a stadium with those types of specs unless there is a substantial amount of money to be made.

As a Southerner, I am extremely proud because the southeast is represented by so many teams from the ACC and SEC. We take baseball serious in these parts!

Each school recruits the best student-athletes that they can that will graduate from college and help them win the College World Series trophy.  With that said, if you aren’t a polished player, you can’t play for Vanderbilt, North Carolina, Florida and the other participating schools in the CWS. You don’t get to Omaha by luck.  You better have talent and a lot of it.

What does it take to become a polished player?  It takes a lot of money!  With an investment of 8K per year, you can get professional development training, exposure and advice.  If you don’t have the money, you don’t have chance.  This is why my wife Kelli and I created L.E.A.D. to serve inner city families in Atlanta that want to use baseball to access a college education. 75% of the families that we serve in the Atlanta Public School System live at or below the poverty level while 34% of African-American males graduate from high school.

L.E.A.D. continues to develop inner city players on and off the field and place them in colleges as student-athletes. We haven’t had an Ambassador play in the CWS yet but it is coming soon. We were fortunate to have Ambassador alum Nick Marigny compete this year in the Junior College World Series representing Southern Union College.

Our year round programming for middle and high school age students is getting stronger especially with the support of individuals like you. Join L.E.A.D.’s Tailgate Club at www.Lead2Legacy.org. L.E.A.D. Today…Change Tomorrow!

Everyone is welcome to attend the College Baseball World Series as a fan but only the skilled student-athletes can take the field.  We will continue to L.E.A.D. the way to Omaha! 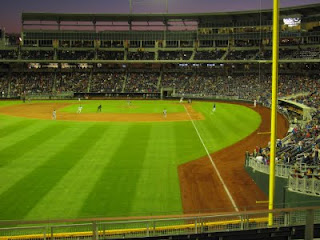