I attended practice and a community project at Young Middle School. The LEADers began their practice picking up trash around their entire campus. They split into groups and left the grounds looking nice. We later began practice and I worked with the outfielders working on receiving fly balls and ground balls.

On a wonderful Saturday for baseball, our day got started with Parks vs. Sylvan. Parks jumped out to an early 5-1 lead on their way to a final 12-1 victory. The win was sparked by the Mustangs bats and some very good defense. Our LEADers from Sylvan could not get anything going and it showed a little in their body language, yet another moment to learn from the great game of baseball.

Our second game had King vs. Brown. This may have been the shocker of the year so far with King pouring runs to a total of 16 for a 16-0 victory. The Dolphins from Brown couldn’t get anything going, which has not been the case up until this point. I had a short pre-game talk with the LEADers from King about commitment and they responded by going out and playing their most complete game so far this season. Despite the one-sided score, our LEADers from Brown never got down on one another and I never once saw any negative attitudes during the game. 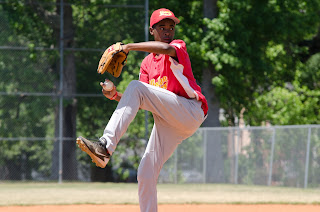 We next featured Harper-Archer vs. Young. Harper-Archer jumped out to a 9-0 lead and held it until the 3rd inning when Young woke up to come back and tie it and later go on for the 12-11 come from behind victory. This game had many ups and downs for both teams and was played hard right to the end. The LEADers from Harper-Archer continue to make strides and while very upset to lose this game, they showed great passion and heart in the defeat.

Due to rain on Friday, Kennedy vs. B.E.S.T. was moved to our last game of the day. Kennedy is another team that has made tremedous strides and it all came together in this game. Although coming up short 8-2, the Rattlers gained a lot of confidence with their improving play. B.E.S.T. continues to show why they are the team to beat with good pitching and defense and timly hitting.