Earlier this week, I was attending a Gwinnett Braves game with a group of our Ambassadors when I heard that Alton Sterling, a black man, had been shot by a white Baton Rouge police officer.

I’m standing there watching the video that I’m sure many of you have seen by now, realizing that it’s something I have to share with the Ambassadors. Speaking with, and guiding, the Ambassadors through situations like this is not something I take lightly. I view it as an opportunity to empower them to use their voices and explore not just what they feel, but why they feel it.

We have a four-step “Pathway to Empowerment” methodology that I used in this situation:

Assessment: Without expressing judgment, I asked the Ambassadors what they knew about the shooting of Alton Sterling. I then asked them to share how they felt.

Engagement: Instead of focusing on what they said, I challenged them to think about why they said the things they did in reaction to the situation. I explained to them that you can’t solve anything with trite statements.
Empowerment: I gave them the power to share their thoughts publicly on social media as Ambassadors for L.E.A.D., as Atlanta Public School students and as citizens of Atlanta.
Application: Lights, camera, action . . .I decided to shoot this video so you can see the reaction of the Ambassadors as they watch the video for first time of Alton Sterling being, and then I asked a couple of the Ambassadors to share their thoughts on what happened and what they want people to know about them as young black men.
L.E.A.D. Ambassadors share their reaction on the murder of Alton Sterling
No doubt, the shootings this week of Alton Sterling and Philando Castile have left many feeling helpless, angry and a whole host of other emotions. Hate and fear are two of the emotions I’m sure many of you have felt, but it’s not what we want for you or for our Ambassadors.

To combat emotions like hate and fear, particularly as they relate to the men and women who risk their lives each and every day to protect and serve our communities, L.E.A.D. will be hosting its second-annual “Safe at Home” game this August at Georgia Tech.

We’ll bring together our L.E.A.D. Ambassadors with officers from the Atlanta Police Department so they can interact with one another in a positive setting. Young black males and police officers may have more in common than even they realize – both are targeted and find themselves labeled as thugs, criminals or corrupt because of the actions of some of their peers. Through the “Safe at Home” game, we’re able to bring together two important groups who are assets to our community.

We want to abolish any notion of hatred or fear – from either side. Our young men seek to be stewards of this community, right alongside the men and women in uniform whose job it is to keep this community safe.

Now isn’t the time for hate and fear. It’s a time for reflection and change. Join us. 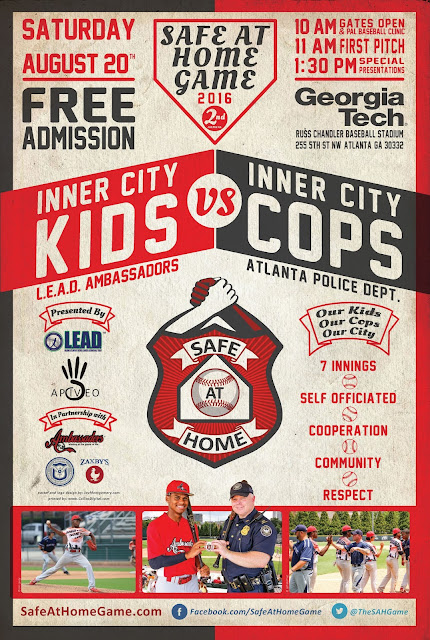