My commitment to L.E.A.D. Ambassadors is to lead them out of ignorance so they don’t end up as anecdotes for others. I fulfill my commitment through mentoring, coaching, teaching, and role modeling. The only way I can be effective is to understand as much as I can about what it is to be a young black male growing up in the inner city of Atlanta today and who loves the game of baseball. I measure up in so many ways but still have work to do.

I wasn’t a drug dealer or trouble maker growing up but I did live in a crime ridden inner city Atlanta community similar to those communities where L.E.A.D. Ambassadors live. I know that youth from inner city Atlanta zip codes 30310, 30315 and 30318 grow up to represent 80% of the Georgia prison population with Georgia ranking number one in the U.S. in incarceration and the U.S. ranking number one in the world. It is my calling to make sure that I’ve done everything humanly possible to empower L.E.A.D. Ambassadors so they don’t become such a statistic.

Up until last year my understanding of inner city Atlanta was somewhat one-sided. I had focused on the community through the eyes of L.E.A.D. Ambassadors. That changed when I was invited on my first APD Ride Along last year. It was so impactful to my understanding of community interactions within the inner city, that I vowed to make an APD Ride Along a bi-annual occurrence.

My APD Ride Along this year took place on Saturday, August 13, 2016 from 4pm to Midnight. Following is my experience this year and why I’m happy that I participated.

Why did I do the ride along?

The experience of an APD Ride Along provides me with an understanding through police officers’ eyes that positively impacts how I relate to L.E.A.D. Ambassadors when faced with questions about law enforcement.

For instance, I accompanied Investigator J.T. Somers and Investigator Ralph Woolfolk. J.T. is a white male, born and raised in New Jersey. He was a former pitcher at Georgia Southern College. Ralph is a black male also from Atlanta. He was a standout multi-sport athlete at Our Lady of Mercy in Fairburn, GA. I have come to know both officers as good men. They are passionate and skilled at what they do. They demonstrate love for people and commitment to justice. I’ve seen their passion, witnessed their skills in action and their compassion for the people they serve. My positive experience naturally transfers to those I serve.

Additionally, and as we all know too well, the rhetoric over the last couple years in America speaks to a war between police officers and young black males. I chose to go on the police ride along because I want to feel what the officers feel when they are in the public eye. I want to see what they see and how they see it. The only way to achieve that is to participate in a ride along.

What did I see and experience while on the Ride Along?

I arrived at police headquarters with excitement at 3:58pm. The rotation was expected to start at 4pm. I was immediately escorted into the parking garage that housed the police squad cars, vans and SUV’s. I’m thinking, “Wow! This is real!”.

At exactly 4:00pm sharp, Investigator J.T. Somers briefed me on a shooting case that we were investigating along with Investigator Ralph Woolfolk. J.T., Ralph and a few select others make up the newly appointed task force by Atlanta Mayor Kasim Reed called Operation Whiplash which was created to jolt crime down. Here’s an 11Alive news segment about the Mayor’s Operation Whiplash.

About 5:00pm or so, after we finished up the necessary internet research and a deep conversation, we were in the squad car headed to the gentrified portion of Edgewood to investigate a shooting. I thought “Are you kidding me? I just heard the radio say shots fired and we are going to the crime scene?”

We arrived at the scene of the shooting. I’m calm only because J.T. and Ralph are calm. The crime scene has now been identified. It is outside in front of a convenience store. We know this from viewing the surveillance tape inside the store. I’m standing there thinking, “Two guys actually had the nerve and total disregard for authority to get out of the car in the middle of the day with guns out, approach this kid and shoot him.” The gunmen just got back in the car after shooting the kid and drove off. The reality is that it happens every day somewhere in Atlanta. I learned that violent crime is up by 25% here.

The street was quickly blocked off so that the crime scene could be investigated. While several officers and I searched for the bullet shell case, along comes a K-9 Unit officer and his German Shepherd. I asked Ralph why the dog was here and he explained that it would find the shell case. I’m thinking “Hmmm Ok” and am anxious to see it happen. I mean “Really? Come on. That shell case is so small and could have been run over by car. It could be anywhere.” Well . . . guess what? It was right over next to the fence and hidden by some leaves. The dog found it within 5 minutes. Geez! 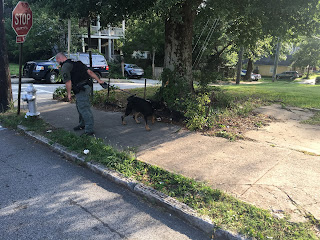 We made a quick stop at Smoothie King – my treat – and headed back to headquarters to continue putting the pieces together on another investigation.

The conversation between me and my Ride Along officers was so awesome. They both have baseball backgrounds and I couldn’t help but ask how baseball helped prepare them to become the meticulous, disciplined and patient investigators that they are. There answer was in the question that I asked. You can’t be successful in baseball without being meticulous, disciplined and patient.

At that moment, I began to realize that if any L.E.A.D. Ambassador chose to become an Atlanta police officer when the time came he would be well prepared because he went through L.E.A.D.’s methodology. Interesting fact, Atlanta Police Chief George Turner was born and raised in the inner city of Atlanta. He went to Atlanta Public Schools, and he learned how to play the game of baseball.

I can tell you the night flew by. Before I knew it, the clock read 12:00A.M. Our shift was over and we were back at headquarters. Shortly after midnight, we were on our way home to our families.

How did I feel?

Although I was wearing a bullet proof vest the entire time, I felt safe with Somers and Woolfolk. I observed that they chose verbal communication over pulling out guns and handcuffs. I also noticed that they treated all people, including suspected criminals, as “innocent until proven guilty”. A little cliché, I know, but it’s how I felt about how they were doing their job.

We had a real conversation about race along the ride as well. The bottom line is that several young black teen males in Atlanta don’t trust cops, especially white cops, in fear that they will be profiled and disrespected. I appreciated Somers, as a white cop, not shunning that narrative for some and making it a reality for others. I became to understand that his life experiences have positioned him to have an empathetic perspective for the plight of young black males in Atlanta.

I also saw that Somers has several verbal pitches that he can draw upon and throw out in varying situations. He acknowledges that everyone is different – just like the hitters that he faced as a pitcher at Georgia Southern University.

Woolfolk was a star in a Nickelodeon sit-com called My Brother and Me in the mid 90’s. Check it out. He was also a baseball client of mine as a teenager aspiring to become a baseball elite player. The stories he told of his experiences as an Atlanta cop with Operation Whiplash, street patrol and Special Victim’s Unit were clear, easy to understand and follow along. Just like a movie.

When will I do it again?

My plan is to do a ride along at least twice per year just so that I can understand and maintain an unbiased perspective on what’s really going on in the inner city of Atlanta.

Famous rapper and actor Ice Cube played Dough Boy in the 1991 Academy Award Winning Movie Boys n the Hood. My favorite line from the movie, and one that sums up why I would put my life on the line with the Atlanta Police Department is this:

“Either they don’t know, don’t show, or don’t care about what’s going on in the hood.”

In the context of the movie, “they” was negative. The disconnected. The status quo. As a son of Atlanta and a trusted consequential leader in Atlanta, I am committed to being connected and not being known as “they”.