Older
Newer
As they say, the third time’s the charm, and so it was for the Atlanta Police Department on August 19 at Georgia Tech’s Russ Chandler Baseball Stadium. APD officers played L.E.A.D. Ambassadors in the Third Annual Safe at Home Game and won this year after having lost to the Ambassadors the two previous years. The final score was APD 14, L.E.A.D. Ambassadors 4. No matter though, the L.E.A.D. Ambassadors are in a rebuilding year and are looking forward to a rematch in 2018.

The real story, however, is not that APD won the game, but how APD officers and L.E.A.D. Ambassadors are changing the game of life in Atlanta’s inner-city communities, in which they live and work, through the game of baseball.

The Safe at Home Game is all in good fun, but with a profound purpose. It is a self-officiated game played at the end of a series of events that are designed to build rapport between Atlanta’s inner-city kids and inner-city and cops. Our work with APIVEO in creating the Safe at Home program has created opportunities for the Ambassadors and the police officers to interact on a level playing field. As a result, each group has new experiences with the other, perspectives change, and create hope for a better future.

I am a police officer for the city of Atlanta Police Department. Words cannot express the joy I had in playing in this year’s police vs youth game. I am one of those officers who patrol through a few of the lower income, inner-city neighborhoods on a daily basis. On a daily basis kids and adults yell vulgar language just at the mere presence of a police vehicle, and I can honestly say a lot of times it bothers me.

On many occasions, I have exited my patrol vehicle and attempted to interact and play sports with the youth. Often the youth refuse to play or an adult comes and tells them to go in the house -” we don’t talk to police”. This baseball game meant so much to me because during and after the game these young 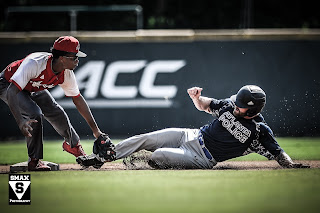 men told me “thank you” for playing. They also told me I’m the coolest and funniest cop they had ever met. It meant a lot to me because I have two small sons who were able to come and watch the game, and see why daddy can’t walk the next day because he is getting old and pulls a muscle every time he plays sports. The kids told me thank you a lot, but I am the one who should be thanking them and the organizations, L.E.A.D., Inc. and APIVEO, for putting this event together. I cannot wait for the next opportunity.

L.E.A.D. Ambassador Neco McClure says that “being able to play in the Safe At Home Game was a gift”, and L.E.A.D. Ambassador Antonio Pierce says he saw that the APD officers were “just like us”. Neco and Antonio also walked away from the experience with a different perspective on the officers they practiced with and played against, and they want others to have the same opportunity.

I thought there would have been umpires at the game, but turns out it was a self-officiated game. I liked that about the game because you gain respect for each other as you tell whether the person was out or not. I also liked that everyone got to play, and if you made mistakes it would be alright. This was my first year at the Safe At Home Game, and I loved how you got to be honest. Honesty is the key to the game. You don’t want to cheat in the game because you wouldn’t want anyone to lie about you getting thrown out or struck out.

The importance of the Safe At Home Game is to get inner-city kids and cops to come together and have a chance at playing a friendly game of baseball.

You’re not only playing a game of baseball, you are also getting to know each one of the police officers and learning about their childhood, and how childhood could make a difference in how you live further in life.

Being able to play in the Safe At Home Game was a gift for me. It exposed me to something better in life. It showed me a different way – how not to do the wrong thing, make bad decisions, and be behind bars when I could just be playing baseball, going to college, and have a chance to play in the major leagues.

I would definitely recommend bringing back the Safe At Home Game so that other people can see a different side to cops, and see how we all can come together as a team and build a better city and state.

“Don’t judge a book by its cover.”

What I learned from the Atlanta Police Department and Ambassadors experience, is that the police officers we met are a special group of men. They are just like us. They have a job just like us. I have known people to belittle cops because someone they know has committed a crime. What I know is that if you commit a crime you have to do the justified time.

I learned that APD men are just like us. They have been through some of the same things we are going

through as most are retired baseball players. The APD men were well rounded, very outspoken and uplifting. They taught me a lot about my ability to play this game we love – baseball. They mentored me along the process. Some of the officers – I’ve been knowing for years – are so cool to hang around. I had fun practicing and fielding with the them. It was such a great experience. I want to have the Safe At Home Game ever year.

I have personally learned a lot over the last three years of L.E.A.D.’s involvement with Safe at Home. For instance, we don’t put forth enough effort getting to know our police officers. We spend more time on, and put more effort into, learning about celebrities and their lives, than we do getting to know those whose job it is to protect us.

Additionally, I have participated in Zone 3 police rides – Zone 3 is the area around where Turner Field used to be. I witnessed APD officers heading into gunfire after an alert by Dispatch. My instinct, as a civilian, when I heard the same alert was to get as fa

r away from gunfire as possible. That experience made me question what would happen without a police presence in our neighborhoods. I imagine chaos.

I would be remiss not to mention the conversations I’ve had with our police officers’ wives over time. What stood out the most from those talks is that these officers have families, same as me, only I don’t put my life in danger like that on a daily basis.

My personal participation in the Safe At Home program has been humbling. I also think that through my participation, I’ve helped to shine a light on two groups in our community who get a bad reputation because of what a few people do. Through Safe At Home, I’ve been a part of highlighting what’s good about Black boys and cops.

The relationship between APIVEO, Atlanta Police Foundation and L.E.A.D. is stronger now because of our work together on Safe at Home. That’s a win for our Ambassadors, our officers and for Atlanta overall.

Together our voices will be heard as we develop Atlanta’s next generation of leaders. You can help. Visit www.lead2legacy.org to learn more.