This article was originally published in Atlanta Magazine. 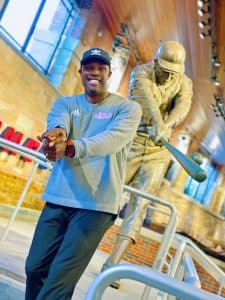 Growing up in Atlanta as a young baseball player, I naturally idolized Hank Aaron. But over the years, I have identified with his journey and been inspired by his character in ways far deeper than simple admiration for a remarkable athlete.

Hank Aaron grew up in a loving home in Mobile, Alabama. His family—like most of our families in L.E.A.D. and like my own family—was poor, and they faced the social-economic struggles that always come with poverty, as well as the challenges of Jim Crow racism. I know from experience that for Black Americans, education has always been viewed as a powerful tool not only for edification, but also for assimilation. Throughout my life, I’ve heard elders and ancestors express, If we can just show white people that we are as smart as they are, it will open doors. Understanding the weight that education holds in the Black community, I can imagine how difficult it must have been for Mr. Aaron to leave school for professional baseball. I faced the same decision when I decided to pursue the Chicago Cubs over going to college. I know Mr. Aaron must have met with a lot of opposition because of his decision, and I thank God that whatever was convicting his heart to follow his dream had his mind so stayed on it that he didn’t allow himself to be deterred.

Now, I know Moses Fleetwood Walker and Jackie Robinson blazed significant trails for Blacks in baseball, but what makes me identify so closely with Mr. Aaron is the impact of his presence in the Jim Crow South. The Braves organization, with its star slugger, moved to Atlanta from Milwaukee just two years after the Civil Rights Act passed in 1964. They were the first major league professional sports team in the South, and Mr. Aaron’s very presence helped give leaders here the audacity and permission to call Atlanta “The City Too Busy To Hate.”

Only Atlanta was not too busy to hate. As Mr. Aaron closed in on Babe Ruth’s homerun record, he faced unprecedented harassment and danger. On the road, he couldn’t stay with the rest of the team, and he faced a barrage of death threats. I can’t imagine the anxiety of stepping on the field not knowing if anyone was going to harm you while you were playing.

Uncertainty haunted Black Americans during this time, making many wonder constantly, Did I do anything to piss off a racist white person enough for them to visit my home? I can imagine there were many sleepless nights in the Aaron household. One thing most people know about me is that I love my wife and daughters with a fierce, protective love. I cannot imagine leaving home, knowing that my family faced FBI-level threats, and still going to work and hitting bombs daily. I always say that talent is what you do well, but skills are what you do well even when you’re under stress.

Mr. Aaron’s story speaks volumes to me. My life parallels his in a lot of ways, and I will continue to follow his example and use the platform that baseball has given me to raise up poor, Black boys in this city who can walk in my shoes and, maybe, even Mr. Aaron’s.