I attended Grove Park Elementary School (APS) for grades 1st through 5th. During that time, Dr. Alonzo Crim was our superintendent for Atlanta Public Schools. I never met him personally but I saw him often walking the halls at the school. My overall experience with APS was great and I associated that with the head man in charge. As an adult, I now realize that Dr. Crim was more than just the “head man in charge”. 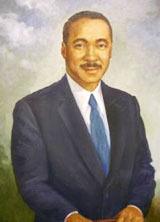 Dr. Crim came to Atlanta Public Schools in 1973 on a mission to give every child in the district an opportunity to receive a quality education regardless of complexion or skin color. In 1972, the Atlanta Compromise was proposed as part of the settlement of the federal de-segregation suit and constituted that Atlanta Public Schools had to adjust their administrative staff so that 50% of the staff would be African American. In addition, APS had to hire an African American superintendent of schools. Cited

Upon accepting his invitation, he remarked that he wanted to create a county “where students would know that people cared about them”, and provide them with the tools necessary to achieve their greatest potential. Dr. Crim turned the focus from race to that of learning by initiating what he termed a “Community of Believers” – a network that consisted of Atlanta organizations and individuals who believed in the potential of the city’s children and who were willing to invest time and money in that potential. To Dr. Crim, “belief by the community at large must include the following factors: 1.) Each student is a valuable person fully capable of learning, 2.) our school system can bring about learning, 3.) the economic failure of the nation is dependent on the academic achievement of all students, and therefore, 4.) every person in the total community is a stakeholder and has a vested interest in the Atlanta Public School System.” By 1986, Dr. Crim managed to increase the students’ performance level in basic skills to above the national average, significantly increased attendance rates to higher than 92%, and brought the graduation rate up to more than 70%. He was longest tenured African-American superintendent in the nation by 1986. Cited

My organization L.E.A.D. is a “Community of Believers”. There are currently 46,000 students in the Atlanta Public School System. 79% of the families in APS live at or below the poverty level. Without a “Community of Believers” supporting our students in APS, there will be a loss of hope and increase of bad habits. Dr. Crim has a legacy of believing and achieving. When the book is closed, I want it to be said that Coach CJ believed in us as well. 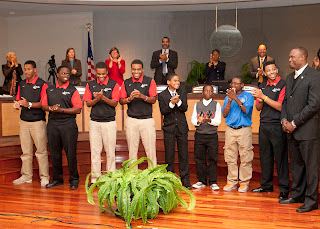